Difference between revisions of "Blog 13"

In this post I am making a Scroll Menu, what is a menu where I can choose from a list of my previous and future menus to use. This is pretty handy so that I don't have to type in a command line to go to an other menu. Everything can just be controlled with the buttons on the Rp_ui_board(User Interface).

The mission is to make it possible that the menu goes up and down and that I then can select between the 2 options displayed on the first and second line of the Rp_ui_board(User Interface). What every button does:

For this script I used some techniques from the previous script blog 12(AlarmMenu).

Don't forget to make an exit function in every script you make that you want to put in the array of menus!

An array is a list names that are put together and you can find with asking for it's number. The number counting of arrays begins with 0 and ends until you stopped giving names. For this I used 2 previous scripts(option 1(blog 10) and 2(blog 12)) and give the other 10 random names. ( I only did that to show the scrolling works. ) 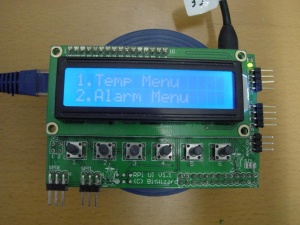 This is the second script and I called it Narray. (Names Array. You can of course call it what ever you want ) This array I made to print this text out on the display. I also could just have used the previous array, but with the second array I can print better names on the display. As you can see some of these names don't use quotation marks, I only did that to show that you only really need to put quotation marks if you want to print a text with a space in it. The display is 16x2, so you can only use a maximum amount of 16 characters in every row. 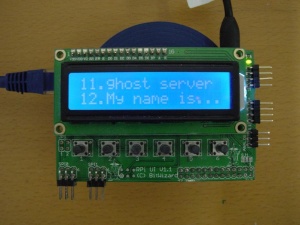 In this part it counts up or down with which the button is pressed. With button 5 is counts down an with button 6 it counts up. The program counts down and up with 2, thanks to that every time 2 new options gets showed on the display. In the array there are 12 menus, so I used %12 so that when counting up or down it will continue at the top or the beginning. ( So that you don't have to go all back to option 2-4 when you are at option 11-12. ) I also explained working with % in blog 12: With % it divides the number before it with the number after it and will give as result the number that couldn't get shared through it. So simple examples:

The numbers that are given as result for pressing the button, will then be send to the last part of the script.

Numb2 and Numb3 will read the numbers that later should be displayed. The given numbers will get a +1, because otherwise the menu will start with 0 instead of 1. This is of course the same with the second line. That also has to be 1 more.

The given numbers will be printed at the beginning thanks to "$Numb2"at the first row and "$Numb2" at the second row. After that it will print the names on the name Array.( Narray ) Thanks to Narray reading the numbers [$Number] and [$Numb2].

The script all together is: 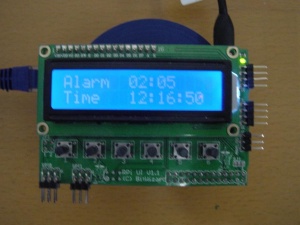 This is the Alarm Menu that you can see if you activate it with button 2
Retrieved from "https://www.bitwizard.nl/wiki/index.php?title=Blog_13&oldid=3619"