Difference between revisions of "Blog 21"

This is used for The project:

While making the analog meter clock, I encountered a problem. That I had one Alternating current voltage. So I had to make from the AC meter a DC meter.

For this I checked it out by putting the power resource after the diode.

To check if the meter you have work on the DIO. Put the minus part of the meter on the GND(Pin 1), and the positive on the VCC(Pin 2). The pointer from the meter will directly go to the right. ( If he doesn't you have to change resistors, or look if everything is well connected )

To connect the meter with the DIO: I did in projects my positive cable on IO0, what is pin 3. ( The other cable has to go to GND Pin 1 ) On the wiki page of DIO you can see, which other pins are IO. 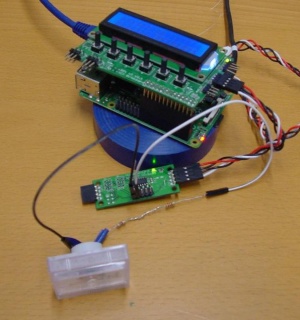 Recommended to use the DIO protocol.

I have in my example the analog meter connected with pin 3(IO0).

To enable the PWM:

To let the pointer go to 50% of the analog meter:

If you are going to use a pin like pin 10(IO6). With the value 40 for register 30 and 5f. The reason it is 40 is, because the bits are in hexadecimals. So, 64 decimal bits gets calculated to 40 hexadecimals.

The reason why this is getting used, is because it is bit masked. With that you can add multiple pins in the command. So, if you you want pin 4(IO1) and pin 6(IO3) on:

For making the sticker I first measured what the distance are from the the maximum and the minimum(0). I looked at the distance from horizontal and vertical. After that I made a picture of the meter. I used the program xfig to make the lines and put the image in the background. So, I know what to put where. After that I printed it out on a sticker paper, what I then put on my meter. It can be tricky work to do a sticker on a meter, so it is recommended to use tweezers. ( Or something else where you can hold it well with ) I used my fingers and that had the problem that my picture was not precisely placed. 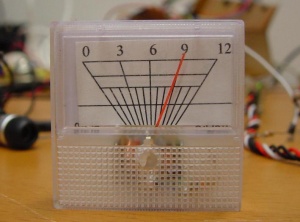 This is the onexit script, What it does is when the script crashes or this function get named by the script. I will do the given commands and then exit the running script. So, in my case it turns the PWM back to zero on pin 3 (IO0), which makes the pointer go back to the left. It after that clears the screen. If you use a different Pin and don't know which one to use you have to look at the DIO Protocol page.

This looks at what hour it's and puts it in the directory name Hour.

What gets printed on the display.

The if statement looks at which hour there is given and looks if it is greater than the given value in $MAX. If it is 12 o’clock or later it will subtract 12 of it. So, for example 18 will become 6.

In the Array stands the amount of steps with the value it should give in hexadecimals.

On the second row of the LCD display the value will be printed of the new hour ( if it is above 12 o'clock value ) and the hexadecimal value in the array. 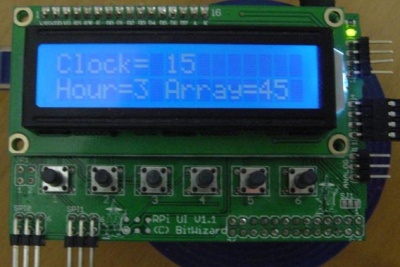 In this script I made an adjustable timer. That will let the meter go form the right to left and after that the raspberry pi will play a song.

The time of how long the progress has to take can be given after the script name. So, if you want the timer to take 30 seconds, it should look like this:

The explanation of the script: Here it will give the amount of seconds the date program knows and give it to the variable Start. The variable Seconds will get the value put after the script name (as in the example above with the value 30 ) ( You can also change the Seconds value "$1" with the amount of seconds you want. ) The end variable counts the seconds and start variable together. I use this later in the script, so that it then knows when it reached it's maximum value.

The now variable gets in the while true list, and is used to read every time to look at which second it is now. In progress the end(where the time ends) and now get counted of each other. The PWM value gets calculated. What gives the percentage of 255 is used.

Here is gives the hexadecimal output of the PWMValue. (So for example, the maximum value 255 would be FF.)

Here the the result gets send to the DIO and to the user interface. What makes that the analog meter is going to move and that on the display is visible what hexadecimal value it is.

In the onexit it looks if the now value has gotten equal of higher then the given end value, where it should have stopped. When the end value is getting reached or passed the onexit function is going to run.