Difference between revisions of "User Interface" 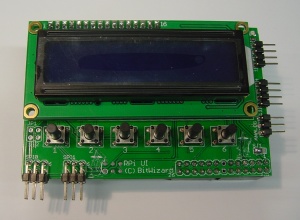 This is the documentation page for the RPi_UI board.

See Setting up I2C/SPI under Linux

Some people report they find it difficult to read the names of the connectors on the PCB. We'll fix that in a future version. In the meanwhile: 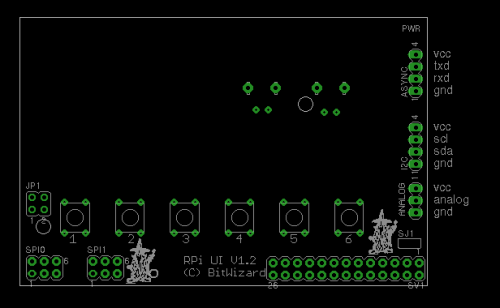 Note that for the 20x4 version of the board, the connectors are in the same order with the same pinout.

The recommended configuration is to have 1-3 connected. The pins 1 and 2 are marked on the PCB. So 1-3 means the jumper is closest to the board edge, running from the "1" to the "J" of "JP1".

People with the buttons/LCD on I2C can/should not install any jumpers here.

We deliver this jumper in the "5V" position with a small PCB trace. If you want to switch to 3.3V you'll have to cut the small trace with a knife.

To make the RPI_UI PCB do things, you need to send things over the SPI or I2C bus to the PCB. A comparison of the two protocols can be found here.

The general overview of the SPI protocol is here.

Controlling the display works the same way as our SPI_LCD or I2C_LCD modules. Reading the pushbuttons is very much like the DIO module. The read and write ports are described below.

The rpi_ui board defines several ports.

Please see this chapter on the page explaining the DIO protocol. There are two major differences:

Setup the ADC (only needed once after reboot):

The temperature sensor is a MCP9700. It's output voltage depends on the temperature. For more information, please see the MCP9700 datasheet.

An initialization and readout script are available on the Temperature sensor example page.

We first designed the User Interface to be equipped with either an SPI RTC or an I2C RTC. In practice the driver for the i2c version was a lot easier, so we're not selling the ones with the SPI RTC unless you really, really want (and we haven't run out of boards by then).

The I2C RTC has a Linux driver, which is available in the standard kernels delivered with raspian. (and probably others too).

and the module is loaded and detects the RTC.

You can then set the RTC with: "hwclock -w". This will write the unix clock to the RTC. Put a "hwclock -s" somewhere in your startup scripts to initialize the unix clock from the RTC. The version 1 raspberry pi's had the i2c-0 bus on the gpio connector, you for the older raspberry pi you'll need to change i2c-1 into i2c-0..

We are not aware of a device driver for the SPI version of the RTC. We can read/write the RTC with bw_tool from the command line using the raw SPI bytes command line option "--hex". The CPU on the board has to enable the CS line for the SPI RTC. This limits the speed of the SPI transactions a bit (50 kHz has been verified working).

will read them back.

Refer to the datasheet of the MCP79522 for information on the registers of the chip http://ww1.microchip.com/downloads/en/DeviceDoc/22300A.pdf

read the identification string of the board.

Display the string "Hello World!" (only the first 5 bytes of the string shown).

This bash script shows the current time and load averages of the cpu. The refresh is set to 5 seconds.